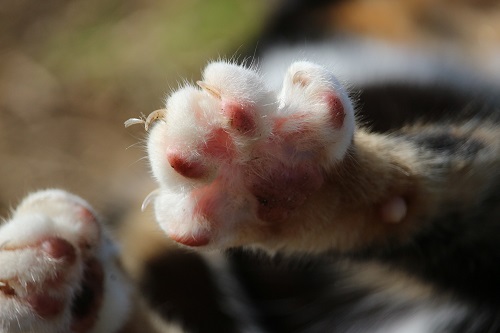 Can my kitten make me sick?

There are many diseases that can be transmitted from animals to humans. These diseases are called zoonotic diseases. Although the list below is by no means comprehensive, some of the more common diseases that we can get from our household pets are:

In this article we are going to look at cat scratch disease (CSD), the cause of it, the symptoms and how to prevent it. Cat scratch disease, or cat scratch fever, is caused by an organism called Bartonella henselae or formerly called Rochalimaea henselae. It is a small anaerobic (organism which does not need oxygen to survive), gram-negative, non-motile bacterium. Domestic cats are the natural hosts for this organism and the animal from which humans can contract the disease (also known as the vector). If a cat harbors this bacterium, the cat very rarely shows any signs of the disease which is described as asymptomatic. It is therefore impossible to tell if a cat is infected with this organism without further testing. Fleas are the organism responsible for transmission of the disease between cats and therefore flea control is one of the best ways to prevent this disease. The infection rate is much higher in a population of cats that are flea ridden and can be as high as 61%. As a cat scratches and bites at fleas, the organism gets stuck between their teeth and under their nails. Kittens younger than 12 months are 15 times more likely to carry the infection than adult cats.

Cats transmit the disease to humans when they bite or scratch a person, causing a break in the skin. There is no evidence to suggest that fleas can transmit the disease directly to humans through a flea bite. Bacteria are also found on the coat of infected cats and can be transmitted to a person with open wounds on their skin by just stroking or holding an infected cat. Bacteria enter the wound of the affected human and causes local inflammation with swelling and redness of the area. A vesicle or an erythematous papule (a small blister almost like a pimple) may form at the site of initial infection during the progression of the infection. Soon after the initial bite or scratch, people develop signs of fever, headaches, decreased appetite, nausea, muscle pain, chills and joint pain. There is a swelling of the lymph glands closest to the area where the initial bite occurred. This is also known as a regional lymphadenopathy. The lymph glands become enlarged and painful and the nodes glands most commonly affected are in the armpit, the groin and the junction between the neck and jaw.

Cat scratch fever is a self-limiting disease in people with a healthy immune system. The disease resolves without specific treatment within 6 to 12 weeks. In children younger than 5 years as well as immune compromised people, complications can occur. Impaired immune systems can be the result of HIV infection or cancer patients receiving chemotherapy. In these cases treatment is necessary and this entails putting the patient on a course of antibiotic tablets which has to be prescribed by a medical doctor. Complications that can occur in patients with weakened immune systems are the following:

The best way to avoid this disease is to avoid situations where you can be bitten by a cat. Kittens are often playful and rough play frequently results in scratches or even bites. When bitten or scratched, it is important to wash the wound thoroughly under running water and cleaning it with a disinfectant. Never let cats lick open wounds on your skin. Since the disease is transmitted to cats by fleas, good tick and flea control is very important in your cat. It is important to take note that you should treat all your animals (dogs, cats and any other animals you may have) for fleas, even if you find just one flea on only one animal in your household. It is often difficult to see fleas on your cat because by grooming themselves they actually often catch and shallow fleas during the process. It is advised that people with weakened immune systems adopt cats that are older than one year of age, since kittens are the most likely carriers of the disease. Keeping your cat’s nails trimmed can also help prevent infection.

If you experience any of the above named symptoms after being bitten or scratched by your cat, it is strongly advised that you see your doctor.